INTRODUCTION
​
In our longitudinal project, scientific methods were used to record and analyze the looking and drawing behavior of experts (instructors) and novices (entry level students) to see if there were differences (or similarities) in how each group observed and drew objects in a scene, and how the novices' behavior changed with training. Experts were tested once; novices 3 times with completion of drawing courses between sessions. The eye-monitoring equipment recorded participants' looking behavior while a digital video camera recorded hand movements. Frame-by-frame scoring of the synchronized movies provides the rich data-base for our descriptive and hypothetico-deductive analyses.
Back to the top
RATIONALE
​
Like the artists, the scientists in our collaboration were interested in what the artist sees when drawing from observation. Additionally, the scientists were looking to explore real-world applications of eye movement research. Cognitive-perceptual psychologists provided the scientific side of our collaboration, bringing a focus on observable actions (i.e., eye and hand movements) to the research. Traditionally, British Empiricists asserted that “all knowledge comes from experience” (Locke). In psychology, this idea was captured by the words of James (1890):
However, we did not attempt to measure attention and perception directly in our collaboration. In contrast to the British Empiricists, contemporary psychologists put action at least on an even footing with perception. Indeed, some theorists have argued that perception (or much of it) is in the service of action (Milner & Goodale, 1998). Thus, we focused on action (i.e., eye movements and hand movements [drawing behavior]) as a window on the working of attention in the drawing-from-observation process and on how that process is influenced by training and practice.
Back to the top
METHODS

We did not attempt to measure attention and perception directly in our collaboration. We focused on action (i.e., eye movements and hand movements [drawing behavior]) as a window on the working of attention in the drawing-from-observation process and on how that process is influenced by training and practice.

Our study was undertaken to record, measure and analyze that part of the drawing process that is often the most difficult for the novice: Where and how does one begin a drawing? To answer these questions, the researchers undertook to record and compare where (a) expert artists and (b) novice artists look and draw during the first few minutes of the drawing process.

A task was designed in which participants were given three minutes to draw a three-dimensional scene of nine simple geometric objects. Eye and hand movements were captured with an eye tracker and video camera.

Our study was less “experimental” than it was “observational.” That is, we were not so much manipulating a variable (cause) to determine how it would affect behavior (effect), as we were simply setting up a controlled situation intended to elicit the natural processes of drawing from observation so that we could observe, record, classify, measure and analyze our participants’ eye movements and drawing behaviors.

Twelve Experts (faculty who teach Drawing from Observation at NSCAD University) were invited to participate by completing one test drawing.

Originally, 16 experts participated in the testing sessions, but factors of attrition and technical difficulties in recording the video resulted in only 12 participants contributing to the analysis.

Twenty novice Participants from the 1st year Foundation classes at the Nova Scotia College of Art and Design provided data from three testing sessions spread over a period of 13 months.

Originally, 37 students participated in the first testing session, but factors of attrition and technical difficulties in recording the video resulted in only 20 participants contributing data to analysis.

​The courses Foundation Drawing 1 and Foundation Drawing 2 were each of fourteen-weeks duration and provided a minimum experience of 125 hours of drawing activity per course (4 hours of instruction plus 5 hours of homework per week). Drawing instruction varied from section to section and none was directed at the essence of the research. It was the accumulated experience of drawing regularly from observation that was important, not that the novices were subject to any particular instruction.

The design of the task sought to examine the kinds of basic challenges normally experienced by a person making a line drawing from observation; recording information about tone and texture was not part of the task. Therefore, the emphasis was on: (a) reading the relative size and placement of objects within the scene; (b) working with information contained in the space between the objects; and (c) reading and recording the scene as a whole (i.e. looking beyond the particular to the panoptic).

Experts came in to the drawing lab and, in a single 3 minute session, draw the arrangement of nine objects. This became the basis upon which we would compare the Novices.

Eye tracking equipment – Each participant was seated at the viewing/drawing station and fitted with the head-mounted SR Research EyeLink II eye tracker (500 Hz binocular eye monitoring, 0.5º average accuracy, 0.01º RMS resolution) with scene camera, all of which was connected to a Power Macintosh G3.

Drawing area – The drawing area consisted of the scene to be drawn and a drawing station. The figure below shows the setup of the testing space. The participant sat facing the space enclosed on three sides by black walls that were 72” high; the fourth side was left open and was where the participant was seated.

The scene to be drawn was composed of nine simple three-dimensional objects painted in five shades of grey and positioned against a black curtain background. From the point of view of participant at the drawing station, each object was separated from the other such that no objects visually occluded another. The objects used for the scene were two identically sized cylinders, two identically sized cylinders, one regular tetrahedron, and four rectangular boxes. No base plane existed. Eight of the objects were attached by rods projected from the curtain; these rods of varying lengths and were not visible from the drawing station. The ninth object was suspended in front of the other eight objects using a clear monafilament string. The group of nine objects occupied a space that was approximately 36″w x 24″h x 30″d. The scene was covered by a black curtain in front of it until participants were asked to begin drawing.

The eye tracker was then calibrated so that its readings accurately reflected where a participant was looking. To calibrate fixations in 2D, a black vertical board (measuring 36”w x 24”h, the same as the width and height of the scene to be drawn) that had a 3×3 grid of red LED lights was presented to participants. The board was positioned directly in front of the scene to be drawn and attached to the right side wall with a hinge. Each light was individually illuminated in random order and the participant was asked to fixate on each LED as it was illuminated. To calibrate fixations in depth, the experimenter used a pointer to indicate locations in depth between the drawing board and the scene to be drawn and the participant was asked to fixate on each point. Upon successful calibration, the eye tracker recorded where the subjects were looking in the three-dimensional space containing the nine objects to be drawn. If calibration was not successful the 2D and 3D calibration procedure was repeated until the eye tracker could record positions that participants were looking at. The calibration board was then swung aside to reveal the black curtain that occluded the drawing scene.

The drawing scene was illuminated by two floodlights set above and to either side of the viewing/drawing station. Test subjects were provided with blank sheet of drawing paper (22″w x 16″h) and a choice of drawing tools (black drawing markers and dark pencils).

A digital-video camera was positioned above and behind the viewing/drawing station to record the subject’s hand-movement throughout the drawing process. The videos were captured directly to a Power Macintosh G3 running Final Cut Express.

The stimulus comprised nine, simple geometric forms, painted in five shades of grey and arranged against a black, curtained background in a way that ensured each object was clearly visible: i.e. looking from the viewing/drawing station, none of the objects appeared to overlap.

​The forms used for the stimulus were: two identical spheres; two identical cylinders; one regular tetrahedron and four rectangular box-forms. No base plane existed. Eight of the objects were affixed by rods and at various distances from the back wall. The ninth object was suspended in front of the group by monofilament. The group of nine objects occupied a space approximately 36″w x 24″h x 30″d. 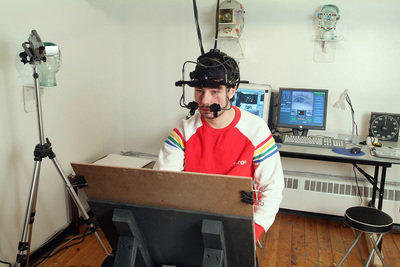 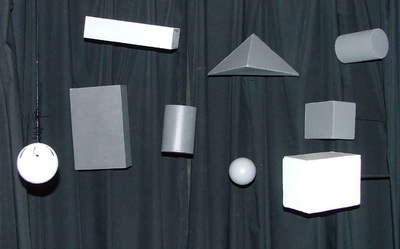 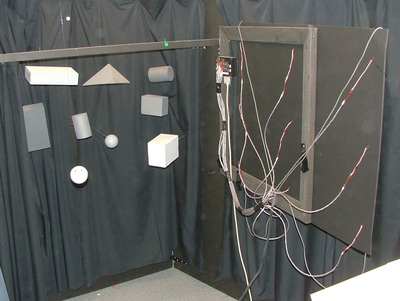 View of nine objects and back of calibration board 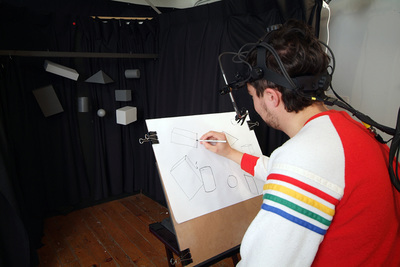 View of drawing from video camera
Procedure
Prior to commencement of a test, the subject was seated at the viewing/drawing station and fitted with the head-mounted Eye-tracker. The Eyelink II was then calibrated to accommodate individual physiological attributes of the subject’s eyes and eye movement.        The calibration process first established the height and width of the viewing ‘window’. A black, vertical rectangle 36″w x 24″h with nine, red LED lights was used for this purpose. The subject was asked to focus on each point of light as it was illuminated. The lights were illuminated in random order. The second part of the calibration involved focusing attention on six points at different depths within the viewing space. When complete, calibration defined the three-dimensional space that contained the nine objects.

Test subjects were presented with written instructions thus:
While the subject’s eyes were closed, the Eye-tracker and a digital-video recorder were started: this to ensure capture of the first moment of viewing and the first drawing action.

The drawing process continued uninterrupted until the subject announced that the drawing was complete or that five minutes had elapsed. At this time the recording processes were stopped.

After subjects completed their drawing, they also filled out a questionnaire. The questionnaire items asked for information on basic demographic details, experience with observational drawing, and drawing strategies. For the Experts, additional questions were asked regarding teaching experience.

​Two independent experts were asked to rate the final drawings for accuracy, composition and overall quality. A five-point scale was used and the drawings, one from each expert  (twelve drawings) and three from each novice (ninety three drawings), were presented in different random-orders for rating by each expert.
Back to the top
RESULTS 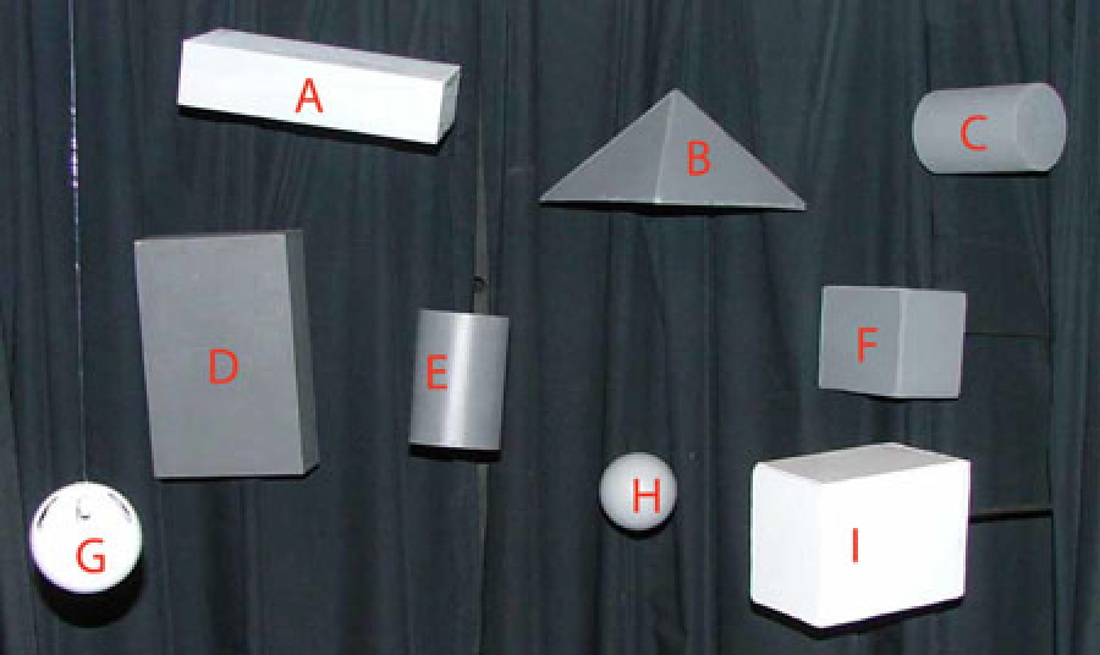 Figure: For purposes of coding and data analysis,  objects were identified a A through I. “Object” Z is the space between objects.

Graph: For each object the Number of Scene Fixations and Number of Hand visits separated by Experts and Novices (collapsed across their three sessions)
The Number of Fixations per object was greater for Experts than for Novices as was the number of times their hands revisited the objects when drawing. There was no difference between sessions for the Novices. 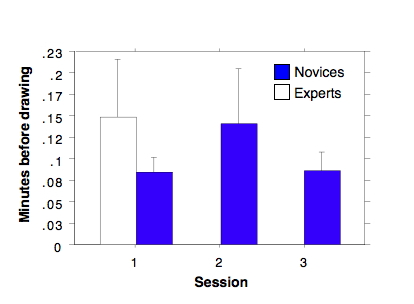 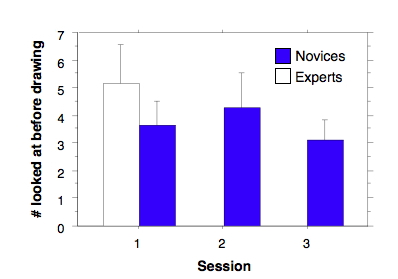 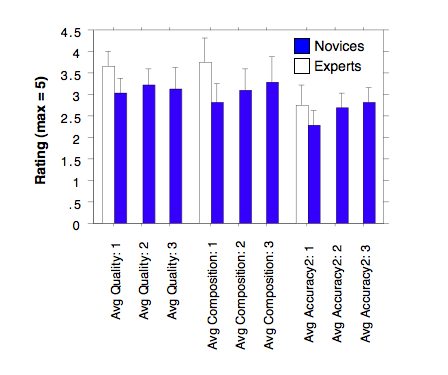